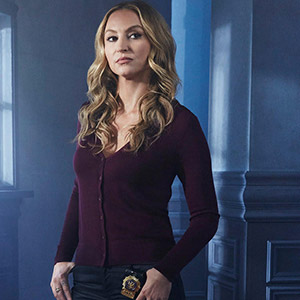 Drea de Matteo, an Italian American, was born Andrea Donna de Matteo in Whitestone, Queens, New York. Her mother, Donna, is a playwright and playwriting teacher, and her father, Albert A. De Matteo, is a furniture manufacturer who was owner and CEO of Avery Boardman and Carlyle.

De Matteo is best known for her role as Adriana, Christopher’s loyal and loving fiancée, on HBO’s critically acclaimed series “The Sopranos.” She won an Emmy and received a SAG and Golden Globe nomination for her memorable portrayal. After her character’s infamous death on “The Sopranos,” de Matteo went on to star as Matt LeBlanc’s sister, Gina, on NBC’s “Joey.” She was also a co-star on “Desperate Housewives” for one season. Most recently, de Matteo was seen as Wendy Teller on the critically acclaimed drama “Sons of Anarchy.” Film credits include “Walker Payne,” with Sam Shepard and Jason Patric; Zoe Cassavetes’ “Broken English,” with Parker Posey; “New York, I Love You,” with Bradley Cooper; “Assault on Precinct 13,” with Ethan Hawke and Laurence Fishburne; Abel Ferrara’s “‘R Xmas,” with Ice T; and “Lake City,” with Sissy Spacek. She just completed “Free Ride,” with Anna Paquin. Aside from being a full-time mom, de Matteo always goes back to HB Studio, where her mother, Donna de Matteo, has taught playwriting for 40 years. She and her mom are always developing and looking out for new writers and projects, as well as working on their own material for the stage. They are currently developing a family drama set in 1950s Harlem and based on their family called “119 Pleasant Avenue” for a cable network. De Matteo has a BFA in film production from NYU’s Tisch School of the Arts.